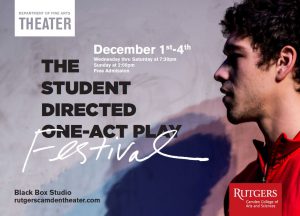 This year’s Student Directed One-Act Play Festival  dives into the Absurdist Abyss and goes to a whole new level with a lineup of absurdist works. Our talented students take to the stage and go behind the scenes to produce some of their favorite plays by some of the best known absurdist playwrights including Samuel Beckett, David Ives, Jean Genet, and more!